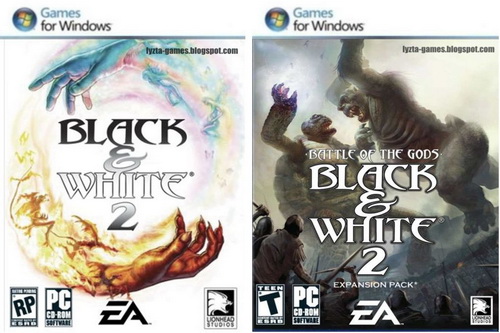 In the game, the player takes the role of a god called from the void (nothingness) to help those who invoked them. However, the player is not an omnipotent style god, but rather a god who rises and falls with his believers and the player must help develop their nature according to their good or evil desires. The player also has a creature, their physical representation in the world, which takes the form of an anthropomorphic ape, lion, wolf, turtle, cow, or tiger. Its physical manifestation can grow to an immense size, and adopt a good or evil persona separate of the player’s.
Developer: Lionhead Studios | Publisher: EA Games
Platform : PC I Release Date : 7 October 2005
Controls : Keyboard, Mouse I Modes : Single-player
Genre : Real-time strategy, god game I ISO Files
Size : 3,26 Gb

Black and White 2 + Battle of the Gods Expansion Download